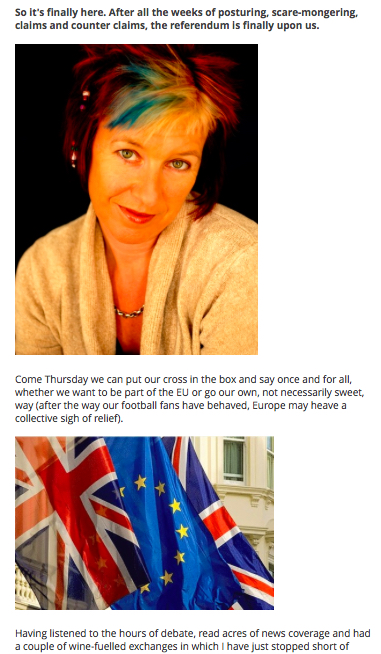 So it’s finally here. After all the weeks of posturing, scare-mongering, claims and counter claims, the referendum is finally upon us.

Come Thursday we can put our cross in the box and say once and for all, whether we want to be part of the EU or go our own, not necessarily sweet, way. (After the way our football fans have behaved, Europe may heave a collective sigh of relief.)

Having listened to the hours of debate, read acres of news coverage and had a couple of wine-fuelled exchanges in which I have  just stopped short of banging the table and shouting “Enough!” ( a habit I am trying to grow out of), I have concluded that the way one intends to vote, boils down to a single, simple question. Namely: is one the sort to become over-exercised about the concept of immigration? Or more of the kind of chap who believes in reserving one’s energies for fretting about the economy? I.e. if you spend a lot of your time muttering about “them” stealing our jobs and taking all the housing, and find Nigel Farage can easily whip you into a lather, you’re in the first camp and  fully focused  on getting OUT.

If on the other hand, you have been struck by how the economists and business leaders and top academics involved in research funding, have all been urging caution on the potential dosh front and you believe that a strong economy is paramount – otherwise how can you sort anything? – then you are probably planning on adding your voice to staying IN.

It strikes me, however, that along with the back-stabbing there is wealth of misinformation on both sides.  Of the sixty-five million of us living in the UK, only around three million are EU Nationals. On the other hand, about five million Brits live abroad, so they’ve still got more of us bellowing at the waiters and demanding more chips than the other way round. (It does give me a wry smile when I hear the Outers complaining that the least those coming here could do is speak fluent English.)  Of those three million, over two-thirds are in employment and contributing to the national coffers. And it is a statistical fact as well as my personal opinion, that if anyone is going to swing the lead and bleed the benefit system dry, it is more likely to be a home-grown Brit than an incoming (and in my experience, very hard-working) Pole.

The hard truth is that we need immigrant workers – the NHS would fall apart without them – and since one in five of our care workers comes from elsewhere, so would lots of the elderly. As for them having nowhere to live, do you know how much of the land that makes up England actually has buildings on it? 2.27%  Yes, I was staggered too.  We’ll just put up some more houses on the other 97%. If all those ex-pats get sent home, we’ll certainly need to!

As far as our wealth and financial stability goes, there’s a tough truth to be faced there too. Nobody knows. Not one of our politicians, experts, pundits or blokes from the pub actually has a clue what the effect of leaving the EU would have on the state purse. It’s all guesswork. It could be brilliant; it might be disaster.

As a friend old enough to have been able to vote the first time around, observed: there is nobody left with any experience of how to run the country without being in Europe. At the end of the day, for all the hypotheses and fears, with the xenophobia and clutching of the Tetleys teabags to the patriotic chests at one end of the spectrum and the idealism surrounding diversity and joys of European culture at the other, what we vote for on Thursday will come down to instinct. Mine says that for all the annoying and petty bureaucracy that comes out of Brussels, we are better off, on balance, with the devil we know.