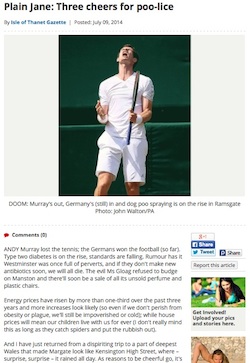 ANDY Murray lost the tennis; the Germans won the football (so far). Type two diabetes is on the rise, standards are falling. Rumour has it Westminster was once full of perverts, and if they don’t make new antibiotics soon, we will all die. The evil Ms Gloag refused to budge on Manston and there’ll soon be a sale of all its unsold perfume and plastic chairs.

Energy prices have risen by more than one-third over the past three years and more increases look likely (so even if we don’t perish from obesity or plague, we’ll still be impoverished or cold); while house prices will mean our children live with us for ever (I don’t really mind this as long as they catch spiders and put the rubbish out).

And I have just returned from a dispiriting trip to a part of deepest Wales that made Margate look like Kensington High Street, where – surprise, surprise – it rained all day. As reasons to be cheerful go, it’s not been a great fortnight. But we have Mike on the Flipside to be a miserable old git – guess who was the first to e-mail about the Manston auction, while chortling with glee?

I am the Pollyanna of the partnership (or so he tells me), charged with sprinkling a little fairy dust on the grey workings of a drab world. It is my job, you might say, to think fluffy and pink.

So dear readers, imagine my delight, when, following my column two weeks ago about mysterious pink circles on the pavements of Ramsgate, to be able to reveal that I have heard from The Phantom Poo Sprayer. Yes!

“OK, I ‘fess up, ’tis me,” wrote TPPS, explaining that it found the biodegradable pink paint on the internet, and, inspired by a group in Cliftonville highlighted in the Isle of Thanet Gazette, began spraying mid-April.

At the time of e-mailing, TPPS, who is keeping an admirably detailed tally of where the abandoned turds appear – Church Road and St Luke’s Road are top hot spots with Upper Dumpton Park Road being, well, thoroughly dumped on (ha ha) – had marked out 43 mounds dog faeces, as it quaintly calls them, and one disposable nappy!

I am therefore regarding TPPS with suitable awe and approbation, and may have a T-shirt printed demanding it be leader of the council. But is one, I wondered, allowed to go paint-spraying willy-nilly, even if one’s motives are good? It seems the Long Arm of the Law raised the same question.

After two police officers were seen assessing the pink paint as a possible graffiti offence, TPPS, ever the good citizen, turned itself in and was subsequently interviewed by phone. “I explained,” it tells me, “that I was trying to highlight dog faeces so people wouldn’t walk in them, and unknowingly tread the result indoors on to their carpets.”

TTPS, who urges me to campaign for dog toilets in public places (couldn’t I just push for people to clean up after their damn animals?) also pointed out the dangers of dog mess to children – it can cause blindness – to young mums who could push their prams through it (ugh) and the visually impaired or anyone in the dark who could walk in it.”

The Long Arm, possibly by now feeling slightly in need of a lie down, considered this. “Carry on the good work” was the verdict.

What a relief! Sensible policing is alive and well. The pink spray continues, and we can be thankful for small mercies, look on the bright side and see clouds lined with silver wherever we go. Mike will be back next week.

You can read the original article at: http://www.thanetgazette.co.uk/Plain-Jane-cheers-sensible-policing/story-21450808-detail/story.html 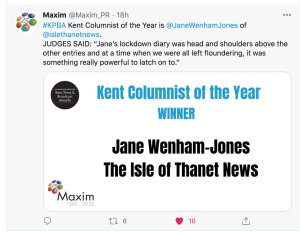