I am naturally thrilled to hear that Thanet Council have been hitting their targets, with a bullseye for 44 out of 58 “key projects”. 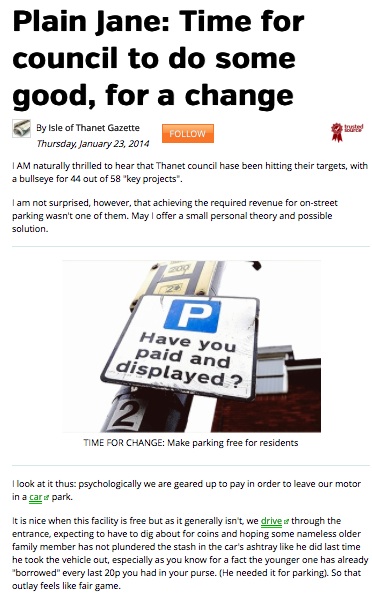 I am not surprised, however, that achieving the required revenue for on-street parking wasn’t one of them. May I offer a small personal theory and possible solution.

I look at it thus: psychologically we are geared up to pay in order to leave our motor in a car-park.

It is nice when this facility is free but as it generally isn’t, we drive through the entrance, expecting to have to dig about for coins and hoping some nameless older family member has not plundered the stash in the car’s ashtray like he did last time he took the vehicle out, especially as you know for a fact the younger one has already “borrowed” every last 20p you had in your purse. (He needed it for parking). So that outlay feels like fair game. Especially when there isn’t a spare square foot of tarmac for miles around and yellow lines stretch into the distance.

Being asked to pay to leave the car in a deserted high street on a dark, wet, windy Sunday night when there is a whole row of empty gaping spaces in front of you,  it is deepest winter and you are off to support one of the local, equally deserted, businesses and are already reeling from your council tax bill, feels like a rip-off, an imposition, and frankly a bloody cheek when one lives here…

It is no wonder that people (me!) after fumbling for the right money, finding the machine has rejected your 50p for the third time, and you only want to have one quick coffee anyway, give up and walk off, muttering “sod-it”.

Assuming, rightly in this case, that traffic wardens will not exactly be thick on the ground.

What we need if I may make so bold, is the following: a resident’s permit for on-street parking during the winter months. Some sort of disc, token, plastic-coated ticket that could be left on the dashboard to indicate one was a bona fide due-paying Thanet local and so was exempt.

This could have a time limit attached – whereby you can only stay for two hours during the day – to prevent the shop and office workers clogging up every available bay and preventing any one else patronising the High Street – and could be financed by asking drivers to pay a couple of quid for it to cover printing costs.

Hell, I’d pay a fiver! Or even a tenner – so the council coffers would probably get more from me than they do now, under the current regime in which I generally fail to have change (see above), park as close to the shop of my choice as I possibly can and sprint there with fingers crossed, or worst of all, decide to go elsewhere, just to save the hassle. The benefits to all would be manifold.

Council taxpayers would feel they were being given some small bonus and the council weren’t such a terrible bunch of bunglers after all.

Council Members could walk around with that small inner glow one gets from having Done Good for a change.

High Street restaurants, bars and shops would get more impulse shoppers, general footfall and customers happy to pop in for “a quick one” having not calculated that by the time they’d paid for parking, they might as well stay at home with a supermarket beer and a bag of crisps.

And I could stop shrieking about who’s taken my last pound coin.